The Nintendo Entertainment System truly was a gaming console designed to not only appeal to fans of arcade games and novelty robots, but to movie buffs as well. Movie buffs of all ages and genres. If you owned a NES, you had access to games based on Disney films, action games based on action movies, games based off horror flicks, comedies and even dramas. In between repeated screenings of Who Framed Roger Rabbit?, cinephiles could find a companion video game on the NES to spend time enjoying. In those rare moments when they weren’t busy reading Entertainment Weekly or standing in line to buy a movie ticket (Yes, people stood in line to buy tickets 30 years ago!), there were video games based on movies that could be played, and if they were lucky, enjoyed.

For the Christmas season, I decided to take that concept of movie tie-in games a step further. What are some NES games based on films that had, loosely or otherwise, a Christmas theme to them? Sadly, there aren’t many. The Gremlins sequel, Gremlins 2: The New Batch, received a video game port on the NES, but this one didn’t take place over Christmas like the first one did. I personally never saw an 8-bit Silent Night, Deadly Night release, either, so chalk that up to a missed opportunity.

Speaking of murderous Santa Claus, that reminds me of another aspect common to most of these Christmas movie tie-in games on the NES….they aren’t that good. The games highlighted in this post commit a number of video game sins, but maybe that’s exactly what you’re looking for this holiday season? Maybe you’re one of those people that believe bad behavior must be punished? If you take a step back and reflect on your own behavior, you might come to realize you could’ve been nicer to your co-workers. Or maybe, just maybe, you should have called your parents more often. They’d agree. Do yourself a favor, repent first and then dedicate this holiday season to self imposed punishment, Nintendo 8-bit style! 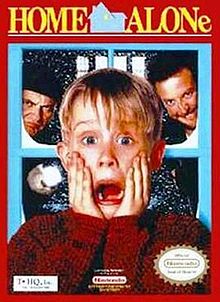 8 year old Kevin McCallister has accidentally been left home alone over the Christmas holiday. A couple of thieves have been casing his large, suburban Chicago residence, ready to strike as soon as the clan leaves town. It’s up to Kevin to thwart their nefarious plans while simply staying alive. This is both the basic plot of the 1990 film and the subsequent 1991 video game from Bethesda & THQ. The goal of the game is simple. Avoid getting caught by the Wet Bandits for 20 whole minutes, which is how long it takes for the police to arrive, and you can beat the game. You can slow down the bandits by simply laying down traps (e.g. box of Christmas lights, spiders, toy cars, etc) in their path. This gives you enough time to make your temporary escape. This sounds simple and not overly difficult, but the reality of achieving this result it is anything but easy. For starters, the Wet Bandits can move twice as fast as Kevin, which makes sense as they are adults and he is a kid. However, trying to climb stairs, ladders and the like while a thief is hot on your tail, can be an exercise in extreme frustration.

Some may watch Home Alone and consider Kevin to be a spoiled brat (they’re right by the way), but what truly makes this game adaptation one for the “N” list is its repetitiveness. The McCallister home contains 3 stories, a basement, a tree house and a front yard. In theory, plenty of area to run around in, but you’ll likely get tired of seeing the same old rooms and environments as the minutes drag on. Most players won’t be able to last more than a few minutes per game due to the difficulty, but if you do….be prepared for a lot of the same thing over and over.

If you’ve got a couple hours to spare during the holidays, you’re better off spending them watching the slapstick shenanigans in the classic Chris Columbus directed, Macaulay Culkin starring flick than you are playing 30 separate games of Home Alone.

I’m not here to debate whether Die Hard is a Christmas movie or not (it is), so please save your breath if you disagree. What am I here to do, is help the reader understand how one of the best action films of all time was unable to properly translate to excellence on the NES.

Like Home Alone, the plot of the Activision published Die Hard video game also mirrors the film. John McClane is visiting his estranged wife at a company holiday party taking place in the Nakatomi Plaza. Unfortunately for John and the party guests, a large team of terrorists have taken over the building and are using the party guests as hostages. Their ultimate end goal is to escape with large sums of money kept on the 30th floor. The game is more focused on thwarting this quick financial plot than it is to save hostages. After-all, the ’80s were the decade of greed, right?

You play the game as the wise-cracking John McClane and you somehow must kill the 40 terrorists scattered throughout the building. You can do this by using a variety of weapons you may find, or by simply using your bare hands. Killing enemies with your bare hands wins you tough guy points, but it’s highly discouraged unless you have no weapon or ammunition. You have just 1 life to accomplish this feat, and thankfully, the game helps you out a little bit by giving you a life meter. This will seem like a very small gesture of developmental kindness by Pack-In-Video when you actually begin playing the game. After witnessing the screen fill with bullets within seconds of starting your game, you’ll quickly come to the realization that staying alive long enough for the terrorists to unlock each of the six safes, is going to be a major challenge. Hypothetically speaking, because I’ve never actually done it myself, you can take on the movie and game’s lead terrorist, Hans Gruber, once all the safes are unlocked. I’m going to have to take the manual’s word for it though.

So what makes Die Hard on the NES so naughty? It’s because the music doesn’t convey a sense of urgency and fear. Just kidding, it’s the difficulty level. In case that wasn’t clear. The concept of the game is actually quite advanced and ambitious. The problem, as with most games that struggle to actually be fun, is the in the execution. You’ll spend most of your time trying to avoid the spray of bullets (impossible) coming from terrorist guns while feebly attempting to hit them with your very basic, ammo limited gun. If you can kill one enemy without taking damage or running out of ammo, you’re making progress. Sound fun yet? Oh, and you can also damage your feet by walking on glass, just like in the movie. So you’re given two different status meters to keep an eye on, overall health and your feet. Just one more way in which Die Hard kicks your butt and makes you want to leap out of the 35th floor window with no rope. Yippee Ki-Yay! 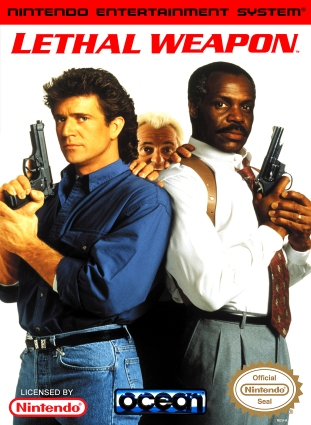 Admittedly, when I think of non-traditional Christmas movies, Lethal Weapon rarely comes to mind. Upon reflection, and a reminder of the film’s plot (it’s been a very long time since I’ve watched it), I will concede that it has just as much right being a Christmas flick as Die Hard does. It also has just as much right, if not more so, to be on the naughty video-game list than either of the first two entries in this post.

Lethal Weapon follows the adventures of L.A. cops Riggs and Murtaugh as they fight baddies while also dealing with issues of mental health, drug addiction and family deaths. None of these yucky plot points have any purpose in Ocean Software’s NES adaptation of the film, however. But you know what does? Shooting bad guys! Kicking and punching bad guys! Shooting and kicking and punching and blowing up bad guys! Hell yeah!

There’s nothing inherently wrong with a simple plot and gameplay for an action game (Double Dragon anyone?), but it has to be executed superbly to avoid getting lost in the shuffle. Lethal Weapon does not do this. It’s mundane. It’s boring and underwhelming in almost every way. The enemies are dull and mostly look the same. The environments are uninspired. The controls can be frustrating and a bit odd. A human cop kicking helicopters out of the air? Whatever. Don’t get me started on the enemies that pop their heads out of the manholes scattered around the levels. I mean, if you’re going to include enemies attacking from above and below, you really ought to give your player an offensive move that allows for defeating enemies lower than you. Lethal Weapon does not. I guess you can kill them with a grenade, but the idea of picking up a live grenade just to throw it back at the enemy makes absolutely no sense.

You know what the film, Lethal Weapon, is? It’s a buddy movie! Guess what you don’t get to do in Lethal Weapon, the game? Play with a buddy! Sure, you can play the game as either Riggs or Murtaugh at any given time, and you do this by walking off the left side of the screen. They are never on the screen at the same time, which is a missed opportunity. Essentially you are tagging your partner, WWF style, to come in and take on enemies for awhile while you take a bathroom or snack break. You know, instead of actually fighting side by side with your fellow Sergeant. Creating a bland game isn’t necessarily a sin, but ignoring your core audience, the fans of the film, most certainly is.

2 thoughts on “NES Christmas Movie Tie-In Games: So You’ve Been Naughty This Year…”