As the saying goes, imitation is the sincerest form of flattery which means that both Combat and Pac-Man should be awfully flattered by the two Vectrex games highlighted in this post. Armor Attack is the Combat-like shoot ’em up in which you control a jeep in an overhead view and blast enemy tanks and helicopters while Clean Sweep is a Pac-Man cloned maze game in which you move around a bank collecting money in your vacuum before the bank robbers can retrieve it.

Armor Attack looks pretty good, much better than Combat, especially the helicopters when they get shot down. The overlay for Armor Attack provides the player with the illusion of a battlefield complete with buildings, dirt, bunkers and rocks. Without the overlay, you really have to use your imagination. This is one game I feel is dramatically improved by owning the overlay, so it’s definitely on my wish list. The game is fun and challenging as the tanks move faster and faster and become smarter as they begin to gang up on you in later levels. It does grow a bit repetitive but that is the case with almost all early 80’s video games.

Clean Sweep pits you as bank manager equipped with a vacuum that is to be used to “sweep” up all the money that scattered around your bank during an explosion set off by a gang of bank robbers. Your job is to move around the maze and collect money until your vacuum fills, then move to the center of the maze, or the vault, to unload your stash and continue on with the task until all of the money has been collected. Of course, there are bank robbers that also move around the maze attempting to thwart your efforts. In each of the 4 corners of the maze, there are rooms that supercharge your vacuum and allow you to turn the tables on your enemies…..sound familiar? Like Pac-Man, there are also doors on each of the four sides that bring you to the opposite end of the maze to avoid enemy attacks but they can use these doors as well. If you go into the vault, you are also safe from attack but it’s difficult to keep your character in one sport as you are in constant motion. You must rapidly move the joystick back and forth in order to stay in one spot. Doing so is counter-intuitive since these maze games are all about constant motion and getting through each maze as quickly as possible, so it’s unlikely you will spend much time in the vault. The overlay adds a green hue to the screen but the rooms and lines of the maze are already very crisp and obvious, so I find it a bit unnecessary to use. Clean Sweep is a decent but unmemorable game that suffers from a little slowdown when there are too many characters on the screen at once. This isn’t common for Vectrex games so it’s very noticeable when you play a game that suffers from this.

Armor Attack: game only. B- 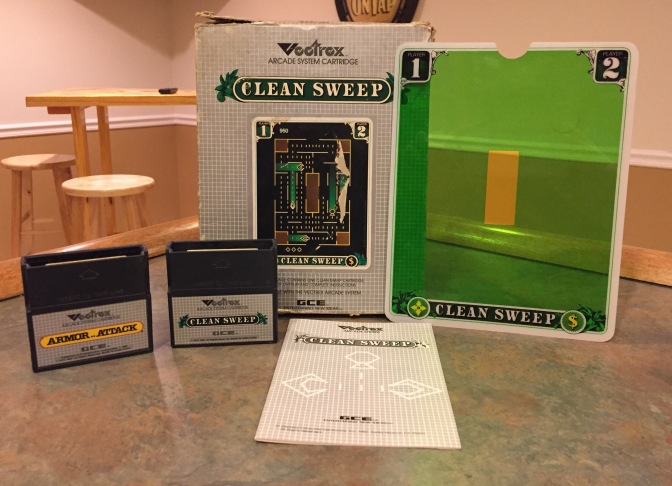