My last post was a celebration of my childhood hand eye coordination, finger speed and my proudest NES accomplishments. This post is a celebration of my near misses, close calls and childhood failures. These are games I spent a lot of time with as a kid and camethisclose to finishing but for various reasons (or excuses), I could not.

The first on my so close but not quite list is the original Castlevania. Now this is a masterpiece of a gothic game compiling a laundry list of monster movie baddies such as mummies, vampire bats, a Frankenstien monster, Medusa & Medusa heads (damn them!) among others. Of course, your final battle is against the Prince of Darkness himself, Dracula. My issues with finishing this game were twofold. First, there are no passwords or battery saves for us poor North American slobs (the Japanese version did thanks to it being on disk) so to beat the game you had to play all the way through in one shot. The second issue that prevented me from beating the game was the area before you get to the Grim Reaper, the level of difficulty amps up tremendously and I could never get to him/it with enough energy to win. Now I know I need to have the holy water when I arrive at the Grim Reaper’s location and he’s toast. I think I’ll be adding this game to the list of games beaten soon.

Another great game that I had as a kid and spent hours upon hours trying to finish but never could was Ninja Gaiden. Anyone who has played this game understands the level of difficulty, especially at later stages when you are constantly bombarded with flying enemies that can knock your character, Ryu, off a ledge to instant death. This is what always did me in when I thought I was playing well enough to beat it. I have made it to the final boss multiple times but could never get over the hump of defeating him. At this point, I am unsure that I ever will. My inability to finish Ninja Gaiden doesn’t detract from it being a great game though.

As a big fan of action/adventure/puzzle games, Startropics was right up my alley when it was released for the NES in 1990. This was a game that I didn’t get upon its initial release but maybe a year or two later when I would buy used games at video rental stores looking to liquidate inventory. I was able to pick up several in box games this way but sadly with Startropics, the copy I bought did not include the original letter that you are supposed to dip in water to reveal an important clue. All it came with was a photocopy of the letteer which doesn’t exactly hold the same value. Thankfully, Nintendo Power recognized the likelihood that gamers would play Startropics without the letter so they provided the necessary code to advance further into the game. With that said, I can’t blame not having the code as the reason I never finished Startropics. I couldn’t finish it because it’s flippin’ hard! The controls aren’t as smooth as some of the better action/adventure games like Zelda and Crystalis and there are enough cheap deaths just when you think you’re progressing far enough to finish it. I would like to give it another try so I am crossing my fingers that my original game is still saved on the cartridge.

I was one of the kids that received my copy of Dragon Warrior for free for renewing my Nintendo Power subscription. While this wasn’t a game I necessarily wanted, I was happy to get any new game at the time. I wasn’t that familiar with RPG’s back in 1989 so the gameplay took a bit to get used to but thanks the RPG elements of Zelda 2, it wasn’t too foreign. Ultimately I played this game and tried to beat it but lost interest as other more exciting games kept drawing me back. I do enjoy RPG’s today but as a kid with a shorter attention span, the grinding and leveling up required to finish it was not for me.

Double Dragon was a great co-op game in the arcades but anyone that bought it for the NES quickly discovered that there was no co-op option and if Billy Lee was going to defeat the Black Warrior gang and get Marian back, he would have to go it alone. As a stand alone game, Double Dragon is a fine beat ’em up and worthy addition to your NES library. However, if you started with the arcade version and you were spoiled by the surprise ending that required you to fight against your co-op partner as Billy’s brother Jimmy Lee, this port doesn’t do that ending justice. I never finished this game because I can’t stand the cave section of mission 3 with their falling stalactites and sketchy jumping mechanics. I’ve gotten past this level before but never with enough lives to make it through mission 4 and to the final bosses (Willie, the leader of the Black Warrior gang and of course Jimmy).

Ah Mega Man…..I loved the second installment of your amazing NES franchise. The first frustrated the hell out of me and since I only ever rented it, I never came that close to beating it. The 3rd, 4th & 5th installments (Mega Man was the original Call of Duty back in the day, releasing a new game every year) all found their way into my collection as a kid. MM3 & MM5 as used titles bought at rental stores and MM4 as a Christmas present in 1992 for a kid that no longer obsessed over Nintendo and didn’t have a SNES yet and only remembered how much he liked MM2 3 years prior. I don’t recall exactly how close I got to beating all 3 of these Mega Man games but I know I enjoyed playing them. There wasn’t any specific reason that I didn’t beat these installments like I did with Mega Man 2, it was just simply a lack of drive and practice sine these all came out when I was in high school and was playing less video games by myself.

The last nearly beaten game on my list is Wizards & Warriors. I never owned this game as a kid but definitely traded and rented it a lot. I could get quite far and I believe I came very close but my time with the game would always run out before I could finish it. I never loved this game enough to buy it for myself so it simply was never was a priority to beat. It still isn’t either despite it being a game tied to a lot of childhood memories. A classic example of a good but not great game for the NES.

Castlevania – game only A+

Double Dragon – game only B

Wizards & Warriors – game only B- 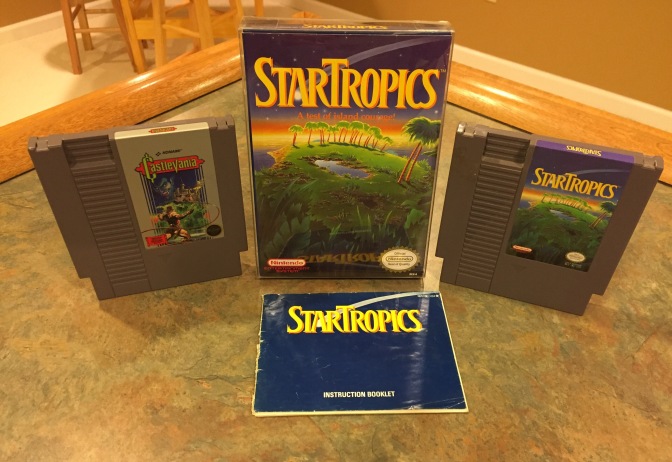