The survival horror genre has been around for about 20 years now and 3D gaming really opened up the possibilities to create environments that are desolate, creepy and downright frightening. The Dreamcast benefited from the increased interest of this style of gameplay and 3 of the games in my collection could be considered “survival horror”.

D2 is part of the D series of games that got their start on the 3DO console a few years prior to the release of D2 for the Dreamcast in 2000. Your character, Laura, is stranded along with a few others in a desolate Canadian winter environment thanks to a terrorist aided plane crash. You soon find out that there is something out there that inhabits its human hosts and turns them into plant-like monsters. Anyone who has watched John Carpenter’s The Thing or even Alien knows what’s going on here. Laura leaves the cabin she has been staying in to venture outside and find out if there’s a way to communicate with the rest of the world and get out of the frozen, plant monster place she’s stuck in. This is where the game begins and you’ll be tasked with solving puzzles, looking at everything for clues, killing monsters and generally trying to figure out what the hell is going on. I have not played through D2, as it is a massive 4 disc game, but much of that is likely cut scene videos as opposed to actual gameplay. If you like your survival horror games more puzzle solving and cinematic in nature than monster killer shooter, then D2 is for you. The game is plenty scary as nothing much beats snow locked, cabin-fever claustrophobia for frightening places to be standed. Add the fact it takes place in Canada (shivers) and you have a pretty decent but not great survival horror game.

On the opposite end of the spectrum from D2 is House of the Dead 2. House of the Dead 2 (like its predecessor) was a light gun arcade shooter with a survival horror theme. The plot has something to do with zombies in Italy and American agents looking to find and rescue one of their own and then ultimately the zombie ridden town’s citizens. House of the Dead 2 was a launch title for the Dreamcast and is compatible with the Dreamcast’s light gun. As I don’t currently own a DC light gun, I play HofD2 with my controller to shoot the zombies and while it’s fun, it’s not the same and probably harder as a result. This game has a lot of potential and I used to play it at Dave & Busters back in the day so I know its also addictive. I just need a darn light gun to really maximize my enjoyment of this stellar arcade port.

Capcom’s Resident Evil series more or less invented the genre with the first installment of the long running series back in 1996 on the PlayStation. Resident Evil: Code Veronica, is the fourth installment in the franchise and a Dreamcast exclusive. The thing with the Resident Evil games before Code Veronica is that they were primarily Sony PlayStation titles but after CV the subsequent games were ported for just about every major console available at the time. RE:CV also was the first RE game to feature 3D environments instead of pre-rendered backgrounds. I guess RE:CV was sort of the turning point for the franchise as a whole. Your character, Claire, is stranded on a prison island while looking for your brother, Chris. There has been a viral outbreak causing living things to turn into blood thirsty zombies and you must find your brother, join forces with another islander, avoid or kill the zombies, collect weapons, solve puzzles and this is really just the beginning of the game! Resident Evil: Code Veronica is also a multi-disc title with a lot going for it. The gameplay isn’t exactly intuitive to start out and I found myself spending quite a bit of time getting used to the controls, making mistakes and having to do things over because I didn’t do them right the first time. Zombies can be tough to kill early on if you don’t have the right weapons so avoid them if you can. Saving the game can be difficult as well since you have to have “tape” for the typewriter. For games this dense and time consuming, it’s always best to just allow the player to save whenever/wherever but that’s just my opinion. The graphics and music are top notch and the general feeling of being stranded alone with zombies trying to kill you around every corner really ups the horror ante. I haven’t played through RE:CV so I look forward to the plot twists and turns that I have yet to see and will have a good time (once I master the damn controls) doing so. 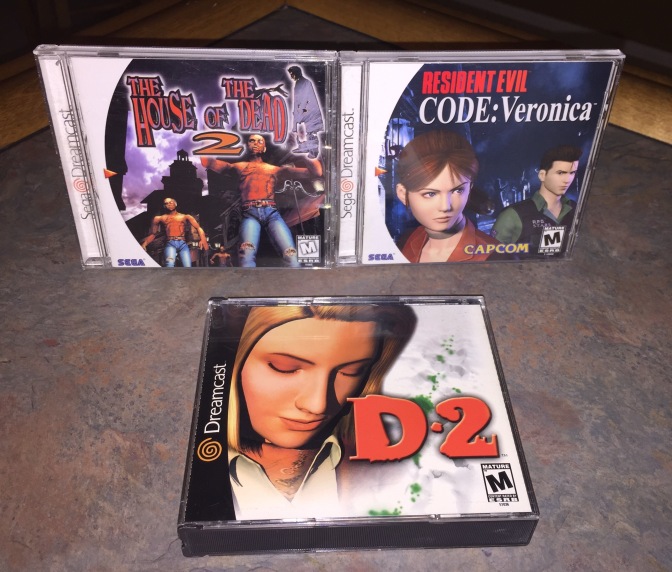