As the racial tension in the U.S. continues to increase thanks to recent events in Charlottesville, it is the perfect time to highlight a video game that was meant to help breach the racial divide and bring us all together as gamers. You wouldn’t immediately think that a game with the title of White Men Can’t Jump would be up to the task…..but you’d be wrong.

We all know that the name of the game comes from the 1992 Wesley Snipes/Woody Harrelson film, which I enjoyed quite a bit at the time (as well as the hip-hop heavy soundtrack). But what you might not know is that the game, released in 1995, was created in the aftermath of the ’92 L.A. riots. The game’s developers, High Voltage Software and Trimark Interactive, set forth on the creation of a basketball themed game for a struggling console that hardly anyone would buy that could bring white and black people together. That game was White Men Can’t Jump.

After inserting the cartridge and powering up the console, you’re met with a very low-fi underground sounding hip-hop track and the chant of “White. Black. White. Black. Black/white unity.” You immediately feel the rush of inclusion with each choppy and muffled word. Next you select your game (vs. or tournament) and various other gameplay options that are only meant to delay the ethnic unification at hand even more. Skip all that bullshit and get into the game!

Next, you get to pick your team. The ballers in WMCJ come from various ethnic and socioeconomic backgrounds so your choice of team has the potential to say more about who you are than any words you’ll speak. While both men and women are represented in the game, WMCJ is notable for its addition of gender fluid and ethnically ambiguous ballers. I mean, some character’s skin color looks gray, which clearly was meant by the developers as a means to allow players to project and insert their own ethnic backgrounds into the game. Teams like the Cool Cats made up of members O.G. and G. Love may seem like the obvious choices based on their looks, names and rep, but don’t let age old stereotypes prevail. A team such as the Urban Angels with members Mace and the gender ambiguous Stress may actually offer the you the sort of cathartic “I am me and I am beautiful” mantra you might need in order to succeed. After all, each one of us has the potential to be an amazing standing half court dunker (which unfathomably happens quite often in this game) underneath these societal “uniforms” we wear. Don’t let anyone, let alone an Atari Jaguar basketball game, tell you differently.

After choosing your United Colors of Benetton team of street ball hustlers, you must borrow money from a couple of loan sharks to get started. Your goal is to eventually earn enough money by winning games in order to pay the entry fee into the Slam City Tournament, and pay back your loan. Think of this as a karmic loan and as long as you help achieve black/white unity in the form of street ball heroics, you can pay it back ten-fold. You’ll probably want to pay the loan sharks back with actual cash though but keep the surplus in your karmic bank for future use.

Now it’s time to travel the beautiful city of greater Los Angeles, from Compton to Venice to Torrance, among other locations, preaching black/white unity. Try to win some games while you’re at it as the goal is to make it to the tournament after all. Unfortunately, you’ll have one hand tied behind your back as the camera zooms in and out and up and down and all over the court. This makes it very difficult to see where the ball is at any given time and to see what team actually has possession. Also, since it’s street ball, no fouls are called and you’ll spend a decent amount of time flat on your back on the court from hard foul after hard foul. The good news is, you can dish them out without repercussions as well, so shove your way to black/white unity if you must. There is a time for non-violence in activism, but this isn’t the time. In order to win, your motto should be “by any means necessary.” There will be plenty of trash talking you’ll have to endure as your detractors attempt to break your spirit as well as your body. You’ll be called “chump” a lot when you act out of turn and you’ll also be screamed at to “watch it” whenever your privilege starts to show. Keep your head up and hit your teammates and opponents with knowledge when they yell “I’m open”. This is their way of telling you they are open to accepting others different from themselves and to get out of their comfort zones. Don’t miss this opportunity to dunk the truth on them.

Probably the biggest advantage to buying and playing WMCJ at the time it was released would be through the use of the team tap adapter. Atari included a free team tap adapter (a $29.95 value!) with the purchase of White Men Can’t Jump to entice those reluctant to unify. It ended up being a Trojan horse of sorts as the team tap adapter could only be used with WMCJ and maybe a couple of other games with less lofty goals. Yes, you could have up to 4 players play WMCJ at any one time with the team tap but I have a feeling that was one of the least used peripherals in the history of console gaming.

I really wanted to feel the black/white unity while playing White Men Can’t Jump and I applaud Atari and High Voltage/Trimark for attempting something so noble back in the mid 90s. The truth of it is, WMCJ failed in unifying our country as evident by current events. I can only assume that those individuals that refuse to see past skin color never owned an Atari Jaguar with White Men Can’t Jump and for that fundamental failure, not to mention it being an awful game in just about every way possible, I give this game an F. 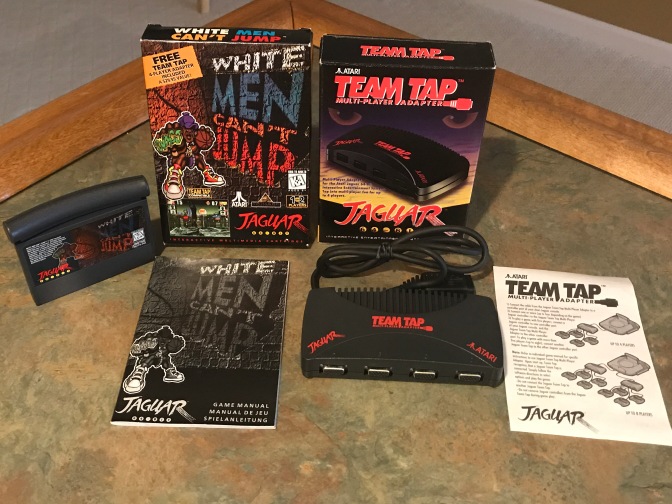