Beat ’em ups were already a popular arcade genre in the late 80s so when you add the undeniable cool factor of ninjas and you have a recipe that game developers would go back to over and over. I admit I was enthralled by ninjas at the time so games like Kung Fu, Double Dragon, Ninja Gaiden and the like were favorites. I was also into kung fu/ninja related films and my favorite GI Joe was the ninja, Snake Eyes. These titles would have been right up my alley if I had owned a Master System as a kid.

Black Belt is an odd looking game at first impression. You move your ninja to the right while identical looking enemies come at you from both directions. You can punch, kick and you can also attack while jumping or crouching. Awkwardly pressing down then up will make you jump extra high, which is important to get the hang of in order to grab the bonus items that flash across the top of the screen. Periodically during the levels you’ll meet up with mini-bosses that break up the monotony. These characters have different attacks than the generic enemies you face. These sub-bosses aren’t much of a challenge, though. Black Belt really only becomes interesting during the end level boss fights. On these screens, the characters are much larger and detailed and these bosses can be tough! You absolutely cannot just mash buttons hoping to defeat them as you will lose every time. You have to employ strategy and find their weaknesses in order to be successful. If you do defeat a boss, your character will deliver a rapid fire series of auto kicks or punches to wipe him out, which is quite humorous looking. C+

A simplistic beat ’em up in card form, My Hero doesn’t offer much in the way of interesting gameplay. You’re a dork in a blue suit trying to save your girl from a mohawked creep and you have to use your fists & legs to get her back. You run to the right, beat up mohowak dude’s minions, avoid knives, bombs, spikes, bottles being dropped on you from above and basically memorize everything about this game if you want to even make it to the first boss fight. You take on Mr. Mohawk in a end of level battle beneath a water reflected sunset and if you defeat him, he will sneak attack you when you think he’s down and out and steals your girl all over again. You are forced to start the same looking level over with added difficulty. My Hero is an extremely tough game with it’s one hit deaths but I’m not sure there’s enough fun factor to be had to put in the work in order to memorize the enemy patterns. D+

Another extremely difficult game, The Ninja, in spite of it’s super generic name, is a pretty decent action title at its core. The gameplay is reminiscent of Commando in respects to the orientation of moving your character up the screen from a primarily top down viewpoint. Like Commando, The Ninja also has one hit deaths to contend with which makes it quite a challenge. You have throwing stars/knives as your weapon of choice and you do have the ability to disappear out of the way of harm if necessary. At the end of each section, you’ll meet up with a sub-boss and defeating them isn’t all that hard. It’s a bit jarring when you do defeat them, the level abruptly ends and you’re taken to a level summary scoring screen…..ok then! The Ninja offers a more varied landscape to play in than other games in this post as you’ll have to contend with playing a section in an isometric view, another section playing frogger leaping from log to log to cross a river and also battling enemies while scaling up the side of a cliff. The Ninja definitely isn’t a beat ’em up but it’s probably my favorite of the 3 of these titles to actually play. I think the controls are done well and its challenging but not so frustrating like My Hero. B 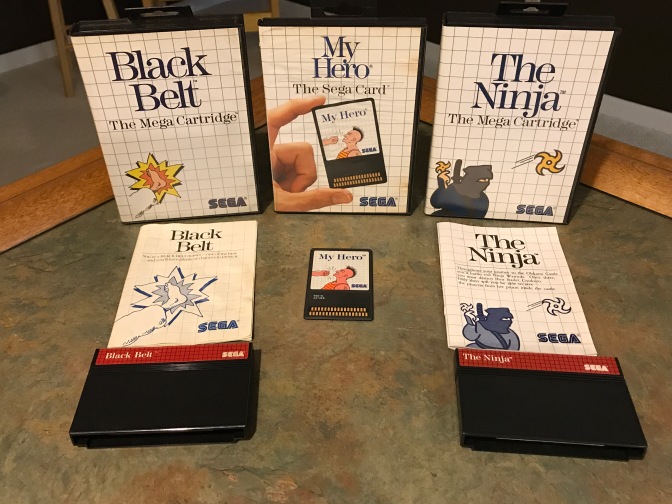 2 thoughts on “Ninja/Beat ‘Em Up Games – Black Belt, My Hero, The Ninja”