It’s the end of the month and time to summarize my thoughts on the Master System, Sega’s first North American console. I think a lot of people dismiss the Master System as Sega’s failed first attempt at gaining a foothold in the home console market and my original opinion of the system was similar. I saw the Master System as a parallel to a debut album by a musician that hasn’t really come into his or her own, with no singular vision. In reality, I’ve spent more time collecting for and playing every other Sega console than the Master System. Can I really blame the pathetic early artwork attempts or shoddy controller for my lack of initial interest? Not really, because I adore the Colecovision and that controller is universally panned and box artwork is only meant to sell a game when it’s new, not after decades post release. I think I dismissed the Master System due to what I perceived to be a lack of amazing games. Wonder Boy looked like a tool. Alex Kidd seemed like a pathetic Mario copy cat. Basically everything Sega put out for the Master System appeared to be a response to something Nintendo was doing better on the NES as seen through my Kool-Aid filled goggles. It really took some deep diving into the Master System library before I finally figured out that it was more than just NES knock-offs and arcade ports, even if they were solid. If I’m breaking down the Master System’s pros and cons for playing and collecting today, this is how I see it.

I did gain a much more significant appreciation for the Master System this month, not just as a competitor to Nintendo back in the 80s, but as its own unique console with a lot of fun to offer. I like the design of the console, the grid-like aesthetic of the boxes/cases, the arcade action and RPGs. Is the Master System as awesome as the Genesis or Dreamcast? No, but I think it rivals the Sega CD add-on and the Saturn in terms of games worth owning and playing. And it’s a helluva a lot cheaper too!

So what did I add to my collection this month? A nice collection of games, a second (working) console and a couple of boxed Sega Control Sticks. I was surprised to find that the second working console I picked up for my collection didn’t have the snail maze game built in like my first Master System, but instead it included Missile Defense 3D! That tells me that the console I bought was originally part of the SegaScope 3D Glasses console bundle. It also came with 2 more regular controllers, another RF switch and my first original Master System AC adapter. I’d been using a Genesis adapter all these years since my original Master System AC adapter died shortly after purchasing it back in 2000-2001.

As for the games I picked up, I added doubles of Phantasy Star, Wonder Boy 3 and R-Type, which came with a better case and a manual that I didn’t have before. These 3 games, specifically Phantasy Star and Wonder Boy 3, are some of the more expensive games in the Master System library due to them being highly sought after.

The new games I picked up were Altered Beast, Cloud Master, Golvellius Valley of Doom, Global Defense, Miracle Warriors, Spy vs. Spy and Y’s The Vanished Omens. All came complete in case except Golvellius and Global Defense which are missing manuals. Several of these titles are RPG’s (Golvellius, Miracle Warriors and Y’s) so I’m excited to give them a chance since I’m a glutton for punishment and enjoy 8/16 bit era RPGs. I also added two in box with manual Sega Control Sticks which on the surface seem like they’d be Sega’s version of the NES Advantage but they are definitely not. The Sega Control Stick doesn’t have any turbo or slow-down buttons that can manipulate the gameplay to a players advantage. What it does offer is right handed control as opposed to the usual left handed found on regular controllers. I don’t have much use for these sticks as they aren’t ideal for precise movements, but I do like having them in my collection. 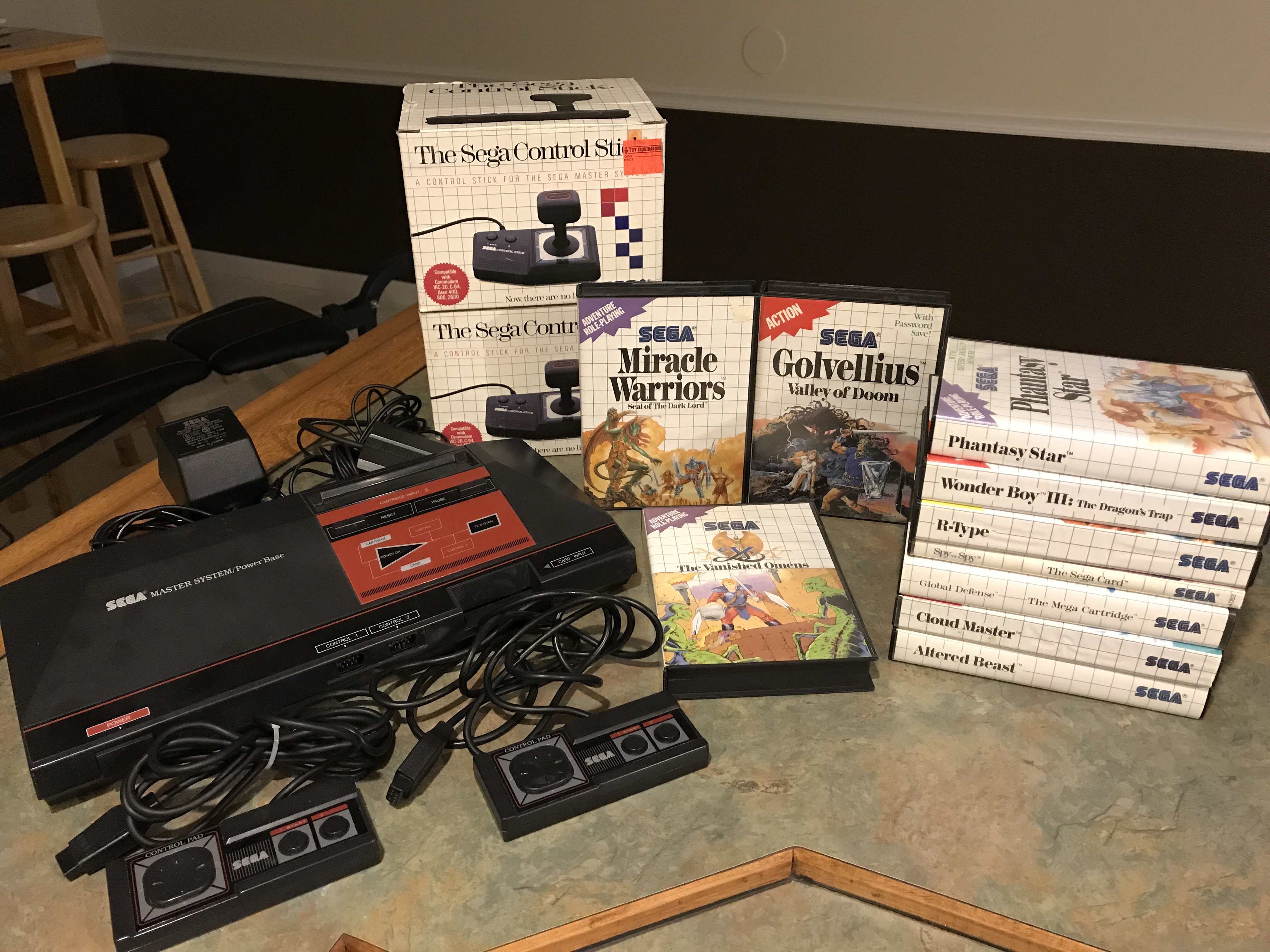