The Need for Speed, or it’s official long winded title, Road & Track Presents The Need for Speed, is the first entry in the long running 3D car racing franchise that got its start on the 3DO. Developed by Electronic Arts Canada and released for the console in 1994, Need for Speed offered 3D graphics, texture mapping, realistic car physics, a nice variety of sports cars including imports, various scenic tracks to choose from & a nice mixture of high speed racing with strategy.

The goal of the game is quite simple, you race using one of 3 camera views (I prefer the one farther back behind the car) against a friend, a computer opponent named X-man or you simply race against the clock. X-man is a radically cheesy 90s bro with one liners, feathered hair, attitude and racing related platitudes for days. He can be a douche at times when trying to hype you up during the race at checkpoints as well if he beats you but he will also give you props when deserved. X-man’s presence tends to provoke a love him or hate him response in players but I personally think he gives the original 3DO version of the game a uniqueness that is endearing since he was nowhere to be found on any of the other ports of the game (PC, PlayStation, Saturn).

With three tracks to choose from, Alpine, Coastal, and City, the Need for Speed offers a nice scenic variety. I really enjoy looking at what Electronic Arts did in providing details to the track scenery, which is very impressive for a 1994 game. Alpine track starts you closer to sea level and you’ll wind your way up into the mountains with each successive checkpoint until the last section of the race takes place at a high enough elevation for there to be snow on the ground. The Pacific Coastal track is another winding course with gorgeous scenery of both the ocean as well as small beachside communities. At one point, you race through dozens of hot air balloons being released, which is awesome. The City course is my least favorite but that’s likely due to the fact that I live in a city so this is everyday scenery for me.

Each car comes with its own unique attributes and you simply need to try them all out in order to come up with the one that best suits your skill level and racing preferences. During the races, you’ll need to contend with other drivers from both directions since they are not closed courses by default. With other cars on the road, the biggest concern is crashing into them at high speed which will take away one of your reserve cars. You can build up more reserves the longer you drive without crashing but I’ve never come close to running out of cars and I’m far from an expert driver.

You’ll also need to contend with the police. They might be sitting along side of the road just waiting for you to pass them by doing 100 mph, or they might be driving, going the opposite way. You have a fuzz-buster sensor that informs you when you’re coming up on a cop, giving you the opportunity to slow down if you want, but I can’t imagine taking this approach. The key is to outrun them but that’s easier said than done especially if you slow down for any reason (crash, hit an obstacle, go off the road) because that’s their opportunity to nail you with a ticket. It can get dicey when they are in hot pursuit and you know if they get in front of you, it’s all over. X-man is a tough enough opponent to beat even if you don’t crash or get a speeding ticket. One or two tickets and you’re not going to win. Three tickets and you’re going to jail.

The Need for Speed is a quintessential early 90s racer and an important title for advancing the genre past the 16 bit era into the 3D 32-bit age. The game’s menu is a bit of a mess but the features of the game scream 90s and I say this with nostalgia and love. Each car has it’s own music video with era defining score (Kenny G like jazz, hair metal cock rock) that shows off the cars and their features all with real CD quality video and music. The game also features 3 different skill levels and with higher skill levels come the option to switch from automatic shift to manual. There is even a superfluous option to show replays from various camera angles. The Need for Speed offers just enough variety and depth to keep an experienced racing game fan interested but not too much depth that it can intimidate a novice racing fan (cough, Gran Turismo 2, cough). Come for the car porn videos, stay for the awesome courses and smooth gameplay. 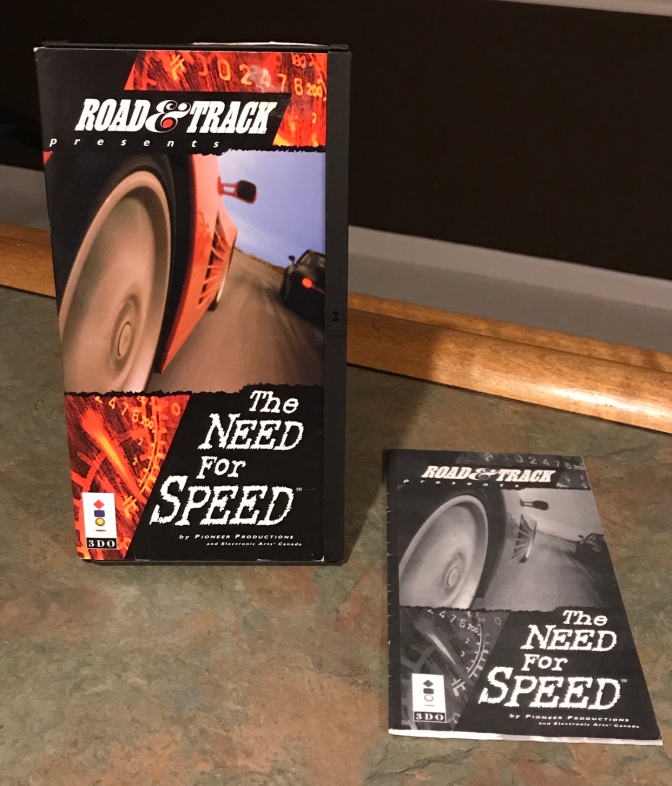