One of the most telling ways a player can estimate the worthiness of a 1990s First Person Shooter is how playable it is 20+ years later. It’s widely understood that 1990s FPSs have, for the most part, not held up well. With basic gameplay mechanics still being established, intuitiveness of controls still be perfected (e.g. strafing), and in-game camera problems not yet fine tuned, many FPS titles from this era can be problematic at best. Then pile intensely pixelated graphics typical of early 3D games on top of those issues and you get a game that can often be hard on the eyes as well as the brain. The 3DO intended to be at the forefront of the CD-ROM games with 3D graphics revolution that seemed to be an inevitability when the system was released in late 1993. Doom and Wolfenstein 3D were two games that really paved the way for other developers to provide similar style games. Enter Studio 3DO, the 3DO Company’s in house development team and Any Channel, an upstart third party developer. Both of the games they created for the 3DO game console, Killing Time and PO’ed, are First Person Shooters with interesting and creative plots. Unfortunately, both of them are also plagued with the issues I already described above.

Killing Time tells the story of an explorer on an abandoned and allegedly haunted island that was once a sophisticated socialite’s playground in the 1930s. She surrounded herself with hangers on, family and would throw massive parties but she was also into the occult and the disappearance of the guests of one of her famous parties is what sets the stage for this early survival horror game. The problem with all this is that Killing Time, at least as far as I got in the game, is a bit on the boring side. While investigating the island, you come across zombies and ghosts of various shapes and appearances, including zombie ducks (?!?!) as well as ghosts of the island residents that advance the plot. These FMV characters look pretty good mixed in with the digitized environments overall. My problem with Killing Time isn’t the plot or theme or even the fact it’s a FPS. It’s a common issue with these types of games in general that I never cared for and that’s being attacked by something you cannot see. I hate walking into a room and begin looking around and all of the sudden start taking damage. I try to spin around and see what it is that’s attacking me but by that time, I’ve already lost 20-30 health points and it just frustrates the hell out of me. I always preferred 2D games for this reason that I like to see where all my hazards and enemies are at all times. In all, Killing Time is an acceptable FPS for the 3DO. There’s nothing horribly wrong or broken with the game and it has some intriguing ghostly elements and occult themes but it’s pretty generic overall. The environments leave a lot to be desired and shooting the same enemies over and over gets tedious.

PO’ed is another FPS but with an entirely different theme from Killing Time. PO’ed takes place on a spaceship that’s been invaded by “bugs”, i.e. butt ugly aliens. I use the term butt literally as some of the pixelated messes for enemies look like walking butts (the manual calls them Buttheads…duh). The rest of the enemies in PO’ed are some of the gnarliest, grossest, weirdest looking creatures ever seen in a video game. On top of that, you take the role of the space ship’s chef and you’re only armed with a frying pan to start so your attack is to smash these gross things over the head until they splat on the ground. While Killing Time primarily took place on a one level playing surface, PO’ed takes place on a ship with many levels and tiers. My biggest problem with that is my character has a tendency to fall off of platforms constantly. Imagine walking around in real life and NEVER looking down to see where you were going. That’s how I feel playing PO’ed. Handicapped and clumsy as hell. I get what PO’ed is trying to do (Doom clone!) but everything looks so pixelated to a gruesome degree since you have to attack melee style, that is, up close and personal. Naturally, the enemies look much better the further you are away from them. Eventually you find other weapons (cleaver, drill, flame thrower, etc.) and even a jet pack but the way that is integrated into the game really isn’t as cool as it sounds and ends up just being another source of frustration. PO’ed, like Killing Time, had potential and it isn’t a horrible game, but it’s just not my cup of tea and I won’t be going back to it very often. 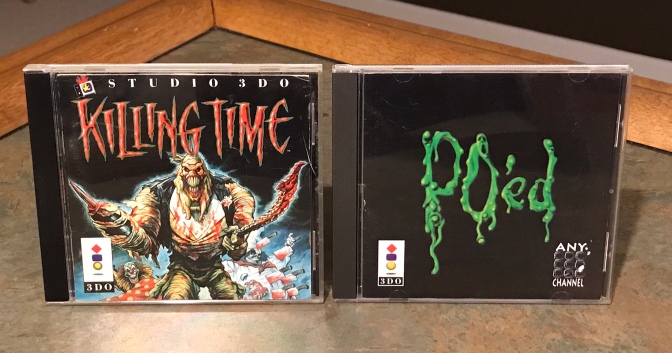