The second you pop UFO into your Odyssey² and turn on the console, you’re going to think “Asteroids-clone”. That is a completely honest and expected reaction and its not without any merit. You start the game controlling a spaceship located in the middle of a black screen with a bunch of colorful shapes whizzing around you. You quickly figure out that you must shoot and destroy these colorful shapes with your laser while moving around the screen using the joystick. Simply by moving your spaceship around the screen, you’ll quickly notice that the two games aren’t that similar after all. In Asteroids, moving around the screen using your thrust can be more dangerous than just staying put and spinning your ship 360 degrees to shoot. In UFO, shooting your laser requires you to move your ship since the laser cannon spins around your ship’s force field and you must be moving in the direction of the object you intend to shoot at in order for your ship’s cannon to be facing the intended target. Another unique aspect to UFO is that your ship’s force field can also act as a weapon. You can run into any of the enemies in order to kill them as long as your force field is active. The only times your force field isn’t active is while you are shooting your laser and immediately after destroying an enemy by touching it. I like this additional option for destroying enemies and it certainly adds credence to the theory that UFO is NOT an Asteroids clone.

There are three different types of UFO enemies that you must destroy. There’s the aforementioned floating colored object UFOs that basically act like asteroids and drift aimlessly. Then there are these other fuzzy blob looking UFOs called hunter-killers, that apparently act like recon ships searching you out and when finding you, send a message back to the mothership to bring out the big guns. The third type of UFO is the Big Bad light speeds starship that when it enters the screen with its tell-tale buzzing sound, you need to do whatever you can to kill it fast or run like hell. Once it starts shooting it’s own super-quick and accurate laser, you’re toast. There are three basic strategies for survival once the light speed starships enter the screen. First strategy is to stay on a parallel plane with them and take them out since they cannot shoot directly in front or back, only at angles. This is easier said than done because they move quickly and their movements are unpredictable. The second strategy is to try and lure them to crash into their own allies. This strategy requires a bit of luck that there will be another UFO directly crossing their path at the exact right moment. The third strategy is to just avoid them at all cost and wait them out as they will eventually leave the screen if they don’t find and kill you after a few seconds. The way to do this is to try and stay as far away from them as possible since the further you are away from them, the more time you have to react to and avoid their laser shots. Ultimately, the entrance of these deadly UFOs on the screen often means your game is over since you’re given only one life to achieve the highest score possible.

So now that I’ve established that UFO is not an Asteroids clone, how fun is it? UFO is first and foremost, addictive. This is largely due to it being quite difficult with your games often ending faster than you’d like or expect. What this does to a typical gamer is inspire them to continue playing over and over again to get better, trying different strategies for survival and increase point totals. What more can you ask for in a retro-game? I guess maybe different skill levels would be nice. I don’t mind sucking at a game until I figure out how to play (assuming I ever do) but my UFO games tend to be very short. I would like to be able to master the shooting controls without having to constantly re-start new games because the light speed ships end them so quickly. Another minor complaint is the shooting mechanic itself. I really don’t care for how you have to wait until your laser is pointed at the enemy before you can shoot instead of moving and shooting being one in the same. I understand that this isn’t possible since the joystick moves your spaceship around the screen so it can’t simultaneously be used to move the laser around your spaceship for aiming purposes. What would make this game ideal is the use of both Odyssey² controllers. One controller to move the ship around the screen and the other controller to blast at enemies in any direction, instead of just the direction your ship is moving. This is the Robotron 2084 method of gameplay mechanics that can really be fun once the controls are mastered. Nevertheless, UFO doesn’t have this option and that’s ok. It’s still a high quality title and a must own for any Odyssey² owner. 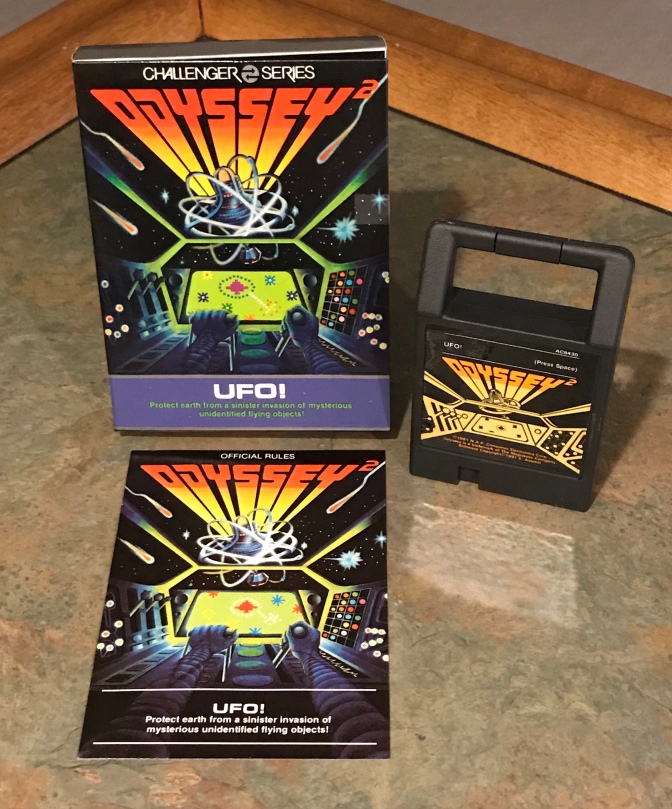