You have to hand it to Magnavox. They really attempted to offer owners of their Odyssey² console a number of unique experiences that weren’t being offered on competing consoles of the day. One of the ideas that they threw against the wall in hopes it would not only stick, but set them apart from the rest of the pack were a few hybrid video game/board games, called Master Strategy Games on the boxes themselves. These games would utilize a game cartridge, a game board, game pieces and in some cases, keyboard overlays that would fit on top of the console. Magnavox had to hope that with these hybrid games they would ultimately appeal to a wide variety of gamers and possibly even draw some non-traditional video game players to their console, such as adults.

These hybrid games always intrigued me thanks to their unique concepts and big, interesting boxes and parts. In some ways, these games feel a bit like the template that was adopted by Nintendo several years later with their Robotic Operating Buddy (R.O.B.) and all his moving parts as well as games, such as Stack Up, that came with pieces unique to that specific game’s experience. The thing about these hybrid games is that they are somewhat complex, require multiple players to really get the most fun out of them and if you’re attempting to collect them, diligence in understanding what exactly constitutes a “complete” copy.

When I bought the two games in this post, Conquest of the World & The Quest for the Rings, many years ago, I really didn’t know much about them or much about what made up a complete copy. Thankfully, the copies I have are complete as far as I can tell and in decent shape. Conquest of the World is a global domination strategy game where you take the role of a nation whose objective is to….wait for it…..take over the world, naturally. In The Quest for the Rings, you are in a fantasy land filled with dragons & wizards and your objective is to capture the mythical and powerful rings, an obvious homage to the Lord of the Rings books. The third game in this hybrid/Master Strategy series is called The Great Wall Street Fortune Hunt, which as the name suggests, is a stock market simulation game. One of these days, I will convince my children to sit down with me and play all 3 of these titles the way they were meant to be played when they were released for the Odyssey² back in the early 80s. Just us sitting down with the manuals, the boards & the video game cartridges plugged in with an hour or so of free time to spare.

The Quest for the Rings – game, booklet, board, overlay, various game pieces, box 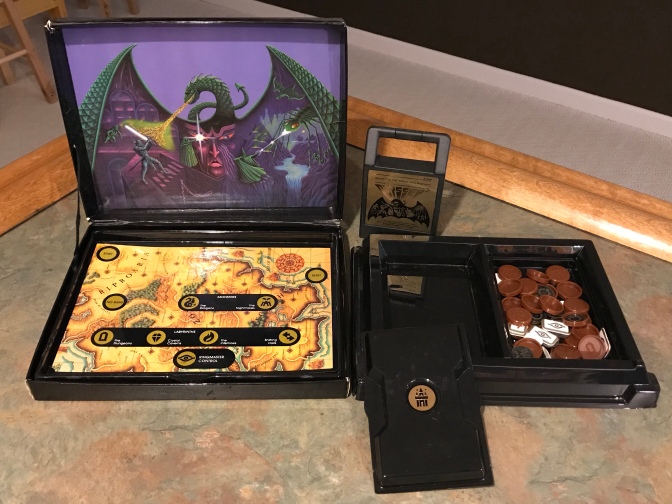