Based on the title of Channel F’s Videocart-10, Maze, one might think this was possibly a Pac-Man clone. Of course they’d be wrong since Maze came out in 1977, 3 years before Pac-Man. So if it’s not a Pac-Man clone, then what exactly are the types of games contained on the Maze cartridge?

Videocart-10 contains 4 basic maze games, titled Maze, Jailbreak, Blind-Man’s Bluff and Trailblazer. All four of these games can be played in the standard 2 person mode. In Maze, a basic maze pattern is presented on the screen and you must beat your opponent to the opposite end. Press reset and you’re presented with another maze pattern. I’m not sure how many different mazes there are but eventually they start to repeat themselves so it can’t be too many. In Jailbreak, the maze is presented in grid fashion and you must bump up against the grid barriers to see if you can “break out”, continuing on in the maze, with the goal of reaching the exit first. In Blind-Man’s Bluff, the screen is entirely blank and you must blindly move around the maze trying to find the pathway. You can choose to leave a trail behind you through a special movement of the controller which will assist you in knowing where you’ve gone but your opponent can also use this trail as well to follow behind you. The also provides an opportunity for strategy since you can leave false trails for them to follow. The fourth and final mode, Trailblazer, is the exact opposite of Blind-Man’s Bluff. The maze is presented as completely filled in and as you maneuver around it as you are essentially identifying the maze trail as you go. The strategy for this version is to paint back over your tracks, preventing your opponent from seeing exactly which route you have taken. You can select how fast your block, or mouse, moves through the mazes by which position the controller is in when you select the game option 1-4. If I had to choose a favorite of these basic 2 player variations, I prefer either Jailbreak or Trailblazer. Maze is too simple. Blind-Man’s Bluff is too hard.

Those 4 versions by themselves could potentially provide hours of fun for 2 players but what if you wanted to play by yourself? The one player option, also known as Cat and Mouse, provides a survival aspect to the game in addition to simply finding your way out of a maze. If the keyboard is pressed after your game & speed selection is chosen, a “cat” (or simply a block controlled by the computer) will start from the exit on the right moving its way towards the left while you attempt to find the exit on the right that the cat started from. You have to take advantage of the computer controlled cat’s mistaken trips down dead ends to get past it and find the exit before it finds you. Occasionally you’ll get a cat that makes almost no mistakes and you’re ultimately doomed but that doesn’t happen as often. You can play the Cat and Mouse variations with all 4 modes of play in either one or two player modes once you get bored with just trying to beat your opponent. In one or two player Cat and Mouse mode, Blind-Man’s Bluff or Trailblazer versions are my favorites as the cat’s movements throughout the maze helps define the correct pattern out easier than if you’re working from left to right without the cat’s help.

If all of those options weren’t enough, there are Paranoia and Double Paranoia versions to choose from as well. You select these options by pressing down on the controllers during then selecting the Cat and Mouse speed variations. In order to win in 2 player Paranoia, one of the mice has to be eaten by a cat first! So even if you manage to sneak by the cat undetected and find the maze, you can’t exit and win unless your opponent has been eaten. Double Paranoia seems like a pointless option where you have to wait until a mouse is eaten just like in regular Paranoia but instead, there is no cat! This is essentially playing a winless version of the game. I’m guessing the programmers knew that this was an option when performing the correct controller and keyboard selections and instead of blocking it out or pretending it didn’t exist, they came up with a name for it and said, have at it if you’re a masochist.

Maze has a ton of variations and options to the point where it becomes quite confusing how to manipulate the controllers and keyboard buttons and the proper order to get to some of the more advanced versions of the game. The manual comes in very handy but even if you’re without the manual, the cartridge label itself includes basic instructions for selecting your game types. That still doesn’t negate the confusing game selection, however. For example, to play Paranoia you must first select buttons 1-4 to pick your maze type, then both players must press down on the controller’s button together while the maze is being painted on the screen, then select cat and mouse by pressing a keyboard button which will determine the speed of your cat and your mice. Other games require different controller movements and keyboard selections as well so refer back to that manual or label often!

In summary, Maze is a decent cart with plenty to offer a Channel F owner in the late 70s. The only problem is, its still just a maze game at it’s core, which will never be the most exciting game you’ll have in your collection no matter how many variations they throw at you. 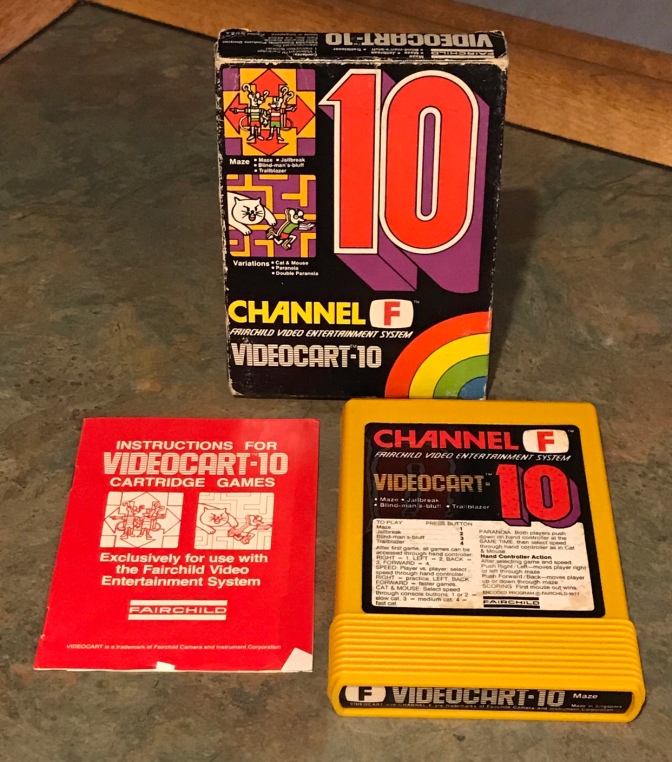