My first experience with a Tony Hawk game was on a handheld. There, I said it. I feel a lot better getting that out in the open, as its been gnawing away at my gaming soul for 15 years now. Activision’s Tony Hawk gaming franchise was a well oiled machine by the time the fourth iteration found its way onto all major consoles in 2002. I had certainly heard of the franchise and was curious about it, since I was a fan of previous skate board games such as 720°, Skate or Die, and T&C Surf Designs. Instead of picking up a version for my PlayStation 2, Dreamcast or Gamecube (I didn’t have an Xbox at the time), I decided to leap into the Tony Hawk experience with the Gameboy Advance version.

What I got was an extremely deep game that provides players with the same cache of moves, tricks, items to collect and missions to complete. The environments are your standard Tony Hawk stuff (shipyard, college campus, zoo, prison, etc.) but the game translates fairly decently on a less graphically complex, 2D based handheld as opposed to the 3D world that it was originally created for.

Like other Tony Hawk games, you spend your time skating around the various levels, performing tricks and earning points. The Career Mode, which was essentially an open world environment, utilized in THPS4 was different than the timed levels that made up the previous 3 incarnations. This allowed you plenty of time to explore the levels thoroughly, perfect tricks and access areas previously unattainable once a special move could be pulled off successfully. This is fairly analogous to the Grand Theft Auto style of level design where you had goals within in each level that were presented to you once you spoke to a certain character, and those goals may have time limits associated with them, but the overall level was still free skate style and you could choose to engage in the goals whenever you felt ready.

Scattered around the levels, you’ll find money & items. Money can be used to outfit your character or videos but you cannot “upgrade” your characters skill level through the use of money. THPS4 is a deep, deep game with enough action activity and goals to keep a player busy for a long time. Once you get used to the controls, you’ll find yourself pulling off all sorts of awesome combos, which is deeply satisfying considering the level of difficulty. My only minor complaint of THPS4 would be the steep learning curve and difficulty. It can be discouraging early on and possibly prevent some players from continuing to play if they cannot master the complicated controls.

While free skating around the levels is a fun time waster, the meat and potatoes of THPS4 is in the career mode and the various objectives. Advancing through the levels and being presented with increasingly difficult objectives to pull off will be your largest source of frustration with this game if you cannot master the vast majority of the tricks required. Despite the high difficulty level, I loved this game when it came out and still hold the GBA version of Tony Hawk 4 in high regard. 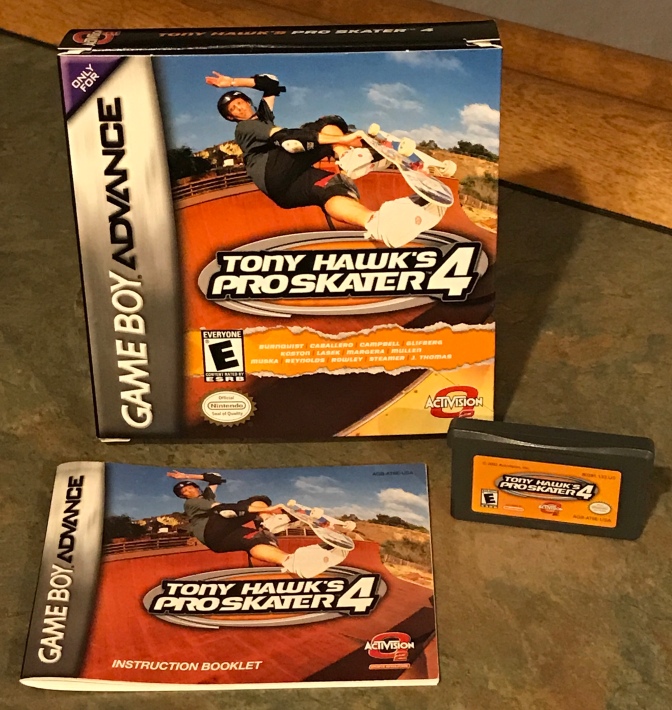