The 2000s were an amazing time for fans of gaming on the go. Nintendo released a couple of stellar hand held systems in the Gameboy Advance and the Nintendo DS that were both commercially and critically successful. Both included some of the best hand held games ever made, advanced certain franchises beyond what was previously imagined on earlier consoles, and essentially dominated the genre of portable gaming systems. Sony jumped into the fray with their PlayStation Portable later in the decade and saw success as well, proving that there was enough hand held system money to go around.

For me personally, the 2000s were the time that I finally embraced hand held gaming as well. The 90s, aka the Gameboy/Game Gear/Lynx era, was not a time when I was buying lots of consoles, systems or games. All of those previously mentioned hand held devices looked amazing and I knew I was missing out on exclusives but I just couldn’t afford them either a high schooler in the early 90s or a college student in the mid to late 90s. By the time the Gameboy Advance was released in the early 2000s, I was now a working adult and could afford to spend my money on gadgets and devices and I took advantage of that fact by buying EVERY console and system released from about 2001 until 2006 or so. While I liked all three handheld systems, the Nintendo DS was my overall favorite of the three due to it’s backward compatibility with the GBA library, its increased screen size, bright colorful graphics, fun games and overall awesomeness. The GBA library overall was more my style than the DS library as it didn’t resort to touchscreen stylus related gimmicks and still looked like a slightly more impressive SNES graphically speaking. The GBA systems themselves weren’t as well made as the DS since the original GBA did not have a backlight and therefore was unplayable in dark environments. This was corrected for the GBA SP and GBA Micro but those two systems were much smaller and the screen size suffered.

By the time the PSP came out, my interest in hand held gaming was already starting to wane. My wife and I moved from one state to another, I started a new job and we began having children. I blame these significant life events, as well as a perfectly suitable DS at my disposal, as the main reasons I didn’t get into the PSP as much as I probably could have. I understand it has a vast and interesting library but I have not tapped into it whatsoever. All three of the systems from my collection I highlighted this month are all relatively untapped since I tended to stick with familiar titles, franchises and sports games. I have not played all of the Castlevania or Zelda games for both systems, and those games alone are worth the price of admission.

I did manage to pick up both Golden Sun games, complete in box, for the GBA as they kept coming up time and again when I’d inquire about the best games that system had to offer. Two other games for the DS that I picked up, Soul Bubbles and Tetris DS, were more because I enjoy quick puzzle type games. I’m always up for PSP suggestions since that system is a huge mystery to me. Let me know what you think are the must own exclusives for the PSP so I can add some quality titles to my pathetic PSP library. 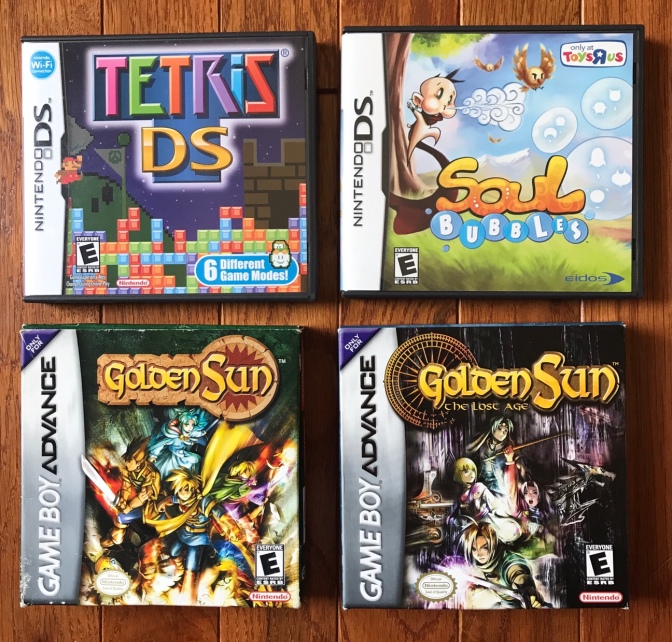