Wow, who knew that half of my PlayStation 2 library consisted of sports titles and music games? And that isn’t even the “Guitar Hero/Rock Band” era of music games either. At this time in my gaming life, newly married, no kids, full time job, one would think I would be spending my free time getting wrapped up in complex and deep role playing games or at least action-adventure titles that pushed the boundaries of what the genre could do? You’d be wrong. I was playing sports games in franchise mode and singing “Karaoke Revolution” with my wife.

We enjoyed the “Karaoke Revolution” series so much that we ended up buying all 3 regular editions as well as the “American Idol” edition, and we didn’t even watch the show during it’s prime! I always thought of myself as a serviceable singer. I can’t do anything fancy with my voice and certain registers are completely out of my element but for songs that I know very well, e.g. “Billie Jean”, “Hit Me With Your Best Shot”, & “Hey Jealousy”, I can follow the notes and score big points. Now that I think back on some of those heated one on one’s, I don’t recall too many games of “Karaoke Revolution that I lost (sorry, honey).

As for the sports games, they all served a purpose at the time. For example, in the fall/winter of 2002, I was changing jobs and had taken a new one in a new town in a new state after having just gotten married only a month prior! During this time, I was living out of a crummy motel and my wife hadn’t joined me in the new town yet so I needed something to keep me occupied while I wasn’t at work. My motel was right next to a ShopKo department store so I walked over and bought a copy of 989 Sports’ “NBA Shootout 2003” in order to play a full 82 game season. Of all the basketball games available to me from EA Sports and Sega Sports, I picked up “NBA Shootout” because the cover athlete was Ray Allen of the Milwaukee Bucks, my favorite team. It’s as simple as that. Put an athlete from a Wisconsin professional or college team on the cover and I’m likely going to buy it. At the end of the PS2 life cycle I had many of the major sports covered. I had college basketball (“NCAA College Basketball 2K3” from Sega Sports), college football (“NCAA College Football 2K3” from Sega and “NCAA Football 2002” from EA), more NBA (“ESPN NBA 2K5” from Sega), NFL (“NFL 2K3” from Sega and “Madden 2002” from EA) and golf (“Tiger Woods PGA Tour ’06” from EA) and they all got serious playtime. No baseball or hockey games found there way into my collection this go ’round. Baseball games fell out of favor with me post 8-bit era. Of the sports game developers during the PS2 era, I was especially a fan of the Sega Sports line of games but also EA Sports’ “Tiger Woods” golf game in particular. Good times but I certainly miss Sega Sports alternatives and I think they did a wonderful job with everything they made in that short period of time of the late 90s and early 00s. 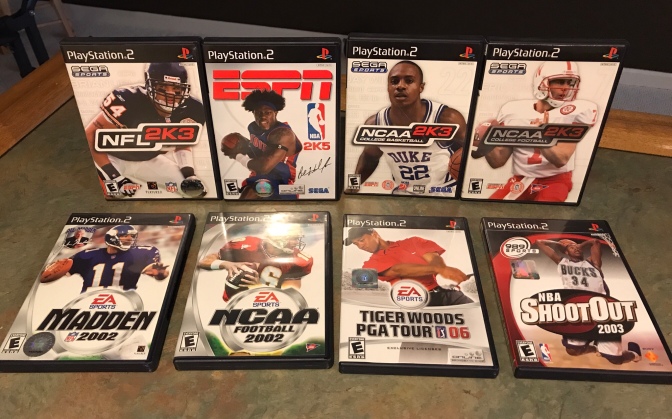