Parker Brothers licensed a number of top notch ports from arcade developers such as Sega, Nintendo, Konami, and Gottlieb during the early 80s. Most of these games, whether they were on the Atari 2600, Atari 5200, Colecovision, Intellivision or Odyssey 2, were going to be of average to high quality at the very least and provide the player with a solid representation of that arcade feeling. The four Parker Bros games I own for the Atari 5200 run the gamut from nearly unplayable to quite enjoyable but the bottom line is most of them suffer at least a little bit from the controller.

Everyone knows what the game “Frogger” is about so I’ll spare the details on how to play and the point of the game. When the 5200 version of this game is turned on, it seems like you’ll be in for a good time as the graphics are improved, as expected, over the 2600 & Intellivision versions and there’s nice music to go with it. The problem with “Frogger” on the 5200 is very simple, the controls. Most versions of “Frogger” only require you to move the joystick in one of four directions and the little green amphibian will jump in the direction you choose with ease. Unfortunately, since the 5200 controller does not self-center, the act of jumping requires you to not only press the direction that you want to move, but to also press one of the controller’s side buttons. I’m sorry, but when you’ve been playing “Frogger” a certain way for decades, asking someone to start pressing a button to move in addition to moving the joystick immediately turns this version into “unplayable” territory for me. I would have likely been better off playing this back in 1983, when it was released, than 2018 as a grumpy old(ish) man that has a harder time with change. I’m probably being harsh, but I don’t really care for this version and would rather play on the 2600.

“Gyruss” is a neat “Tempest” meets “Galaga” hybrid where you fly around in a circle blasting at enemies coming closer and closer from the center of the screen using nice scaling effects. Like most shooters of the era, the goal is clear a wave of enemies from teh screen while avoiding their fire coming towards you in a 360 circle. What makes “Gyruss” in some ways feel like “Galaga” is the inclusion of a double shot power up, which is always a treat to possess, and the bonus stages where you shoot enemies that zip around the screen while you attempt to hit them all before they disappear. The 5200 version of “Gyruss” doesn’t look as sharp as some I’ve played but it seems pretty standard for the era. The constant pressing of the side buttons to fire combined with the mushy joystick of the 5200 controller really does a number on your hand so if you’re quite good at “Gyruss”, you may be using that pause button on the controller fairly often to give you poor hand a break. In all, it’s fun but the painful controls bring this game down a grade for me.

“Popeye” the sailor man, is a great arcade title with a near perfect NES port available, but if you’re going to play a version of “Popeye” anywhere but on the NES, I don’t see why the 5200 version shouldn’t get your time. “Popeye’s” gameplay is ideal for the 5200 controller because you only use the side buttons sporadically to punch (what I think are) cans thrown at you from Bluto or the Sea Hag while maybe grabbing a spinach can per level or to knock the barrel down on Bluto’s head on stage 1, a hard move to pull off in this version for some reason. The joystick does fine moving up and down stairs and across the platforms of the various levels while you collect Olive Oyl’s hearts, music notes or letters. This is a very nice looking and playable version of “Popeye” that 5200 owners should be proud of.

As for the foul mouthed “Q*bert”, the poor little guy suffers a similar but not quite as drastic fate to “Frogger” when it comes to playability on the 5200. The traditional way to play “Q*bert” is to simply move the joystick in the direction you want to jump and it will hop from platform to platform, changing them to a different color while it avoids enemies. Once again, since the joystick doesn’t self-center and the developers didn’t want a player to accidentally jump more times than they intended, the game requires you to press one of the side controller buttons in addition to pointing in the direction you want to move. Easiest way to mimic the arcade’s gameplay would then be to perpetually hold down one of the fire buttons, which can become tiring. While I still don’t like this gameplay change, I understand why it was done. As for how it affects “Q*bert”, well, it’s more playable than “Frogger” in my opinion, but you’d swear I was one of the worst gamers of all time watching me play two games that I normally am quite adept at. It certainly takes some time to get used to.

Gyruss – game only B-

Popeye – game only A-

Q*bert – game only B 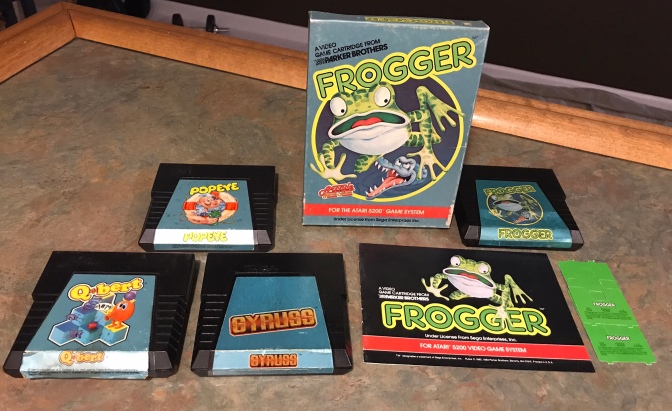