After taking a look back on some of my favorite NES Black Box cover art, or at least the ones that grabbed my attention when seeing them on store shelves as a kid, now it’s time to count down my top 10 favorite from the list of 30. The Black Box games were iconic in establishing Nintendo as the new guard in home video gaming but not all of those titles have held up over time. Many of the sports titles (e.g. “Baseball”, “10 Yard Fight”) were immediately rendered obsolete once third parties started producing similar but better games for the NES (e.g. “RBI Baseball”, “Tecmo Bowl”) but there are a number of games that have withstood the test of time in terms of playability and fun-factor. This is a list of games in which the ease of picking up and playing in that old Atari fashion is high, plus they have crisp, colorful graphics and superior sound, making them truly “classics”. 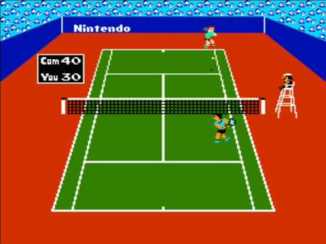 as the second game for the Nintendo that I owned after the pack-in title, “Super Mario Bros” so nostalgia runs deep with this one. “Tennis” may seem like an odd choice as a second game for any NES collection but you must understand I have an older sister who was a high school & college tennis player and she highly suggested I ask for “Tennis” for my birthday. Being the obedient little brother I was, I acquiesced and that was the game I got. “Tennis” is pretty fun for a Black Box title and my second favorite black box “Sports Series” game next.

This game was 100% truth in advertising when it was released. Riding a motorbike over hills, ramps, around mud puddles and oil slicks while experiencing that oh so satisfying feeling when hitting speed bursts right before a ramp is a blast! It was an easy to play, tough to master style of game and the sound of your bike overheating was always such an annoyance that you had to quickly figure out how to prevent it. “Excitebike” was many gamer’s first experience with creating a course from scratch using the track editor feature but I personally never bothered much with that aspect as I was happy enough racing against my friends using the pre-designed courses.

The Black Box titles are filled with superlative arcade conversions and “Popeye” is no exception. In this title, Popeye must collect a variety of items that his gal Olive Oyl drops from above (hearts, musical notes, letters) all the while avoiding Bluto, the Sea Hag and other hazards. If the items that Olive drops rest too long on the bottom level of the screen, Popeye loses a life so he must always be on the go. His trusty spinach provides an extra Bluto-bashing boost but must be used sparingly. This is a great conversion of a fun title and the closest you’ll get to the arcade version of “Popeye”.

I had played “Mario Bros.” with my friends almost daily during the summer as it was the primary arcade machine at the nearest grocery store around this period of time (’86-’88). I loved “Mario Bros.” but because I had played the arcade version so often, the home port just couldn’t hold a candle to it in my eyes. Once NES games started to become dirt cheap in the late 90’s, “Mario Bros.” was one of the first I picked up for a dollar or two to spark my nostalgia for my pre-teen years. Since then, I’ve come to love this version of the arcade classic and it really is the closest I’ve ever gotten to recreating my arcade memories of this game at home.

“Balloon Fight” is one of those “if you love game X, you’ll love game Y” titles due to it’s similar style of gameplay to “Joust”. The basic concept is the same from the standpoint of making sure your character stays above your enemies in order to burst their balloons, then knock them off the screen. If you can prevent your own balloons from being burst, you can clear all the enemies presented on that level, moving onto the next stage. “Balloon Fight” adds new gameplay elements such as bubbles that can be burst for points, lightning bolt hazards, and bonus levels where you must collect all balloons as they are let loose out of pipes. There is also another game option where you tap the button frantically to avoid spiky hazards for as long as possible while the screen scrolls to the left. The NES controller works great for this game and the amount of variety offered on “Balloon Fight” makes this cart a winner. 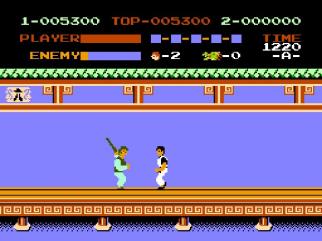 Nintendo’s port of Irem’s arcade hit, “Kung Fu Master”, is an addictive side scroller that requires quick reflexes and a bit of enemy memorization to master. On a quest to save the lovely Silvia from the clutches of evil Mr. X, you’ll punch and kick your way through hordes of baddies, some more interesting (a character who’s head pops off!) and difficult (those darn knife throwers) than others. Each level (or floor) ends with a boss fight where strategy must be applied over brute force. “Kung Fu” was one of my favorites as a kid and one of the first games I ever “beat” which certainly increased my desire to continue playing games all the way through, when possible.

The Granddaddy of the Arcade Classic Series of Black Box titles, this is the version of “Donkey Kong” that most of us fans of the arcade original were hoping for. The levels that are present on this cart are designed identically to the arcade. The gameplay difficulty is about the same and the sounds of Mario’s squeaky shoes, Donkey Kong’s grunts and Pauline’s cries are near perfectly recreated. Why couldn’t this version of “Donkey Kong” include the Pie Factory screen is beyond me, however. This is still the best of the arcade series.

It’s difficult to not include “Duck Hunt” on a list of the best Black Box titles even though I sometimes struggle to determine what light gun game is my own personal favorite. Is it “Duck Hunt”, the iconic and most recognizable light gun game where you shoot at ducks in an open field while your trusty canine sidekick laughs his butt off at your failures? Or is it the wild-west themed “Wild Gunman” or the gangster era “Hogan’s Alley” (it’s definitely NOT “Gumshoe”)? They all offer about the same style of gameplay but suffer a tad from repetitiveness once you’ve mastered them. I guess I’ll stick with the game that introduced many of us to the wonders of aiming a gun at a television screen, seeing the effects of our trigger happy fingers played out right into front of us. “Duck Hunt” is likely one of the main reasons why many of us continue to scour internet classifieds for free CRT televisions.

Pro Wrestling was another Black Box title I owned as a kid and I clearly enjoyed this game a lot as I kept my copy throughout my childhood and beyond. The complete in box copy in my collection today is the same as the one I had in 1988, which I can’t say about too many other NES titles. I have a lot of great memories playing this game against my friends so the nostalgia glasses are once again worn proudly but justifiably. I personally preferred using King Slender as my wrestler of choice but Starman was another favorite. Both had easy special moves to pull off, which was a huge advantage no matter who you were playing against. Unlike other games on this list, I never beat “Pro Wrestling” as I couldn’t quite get to the Great Puma, let alone defeat him. I’ve come close many times but it takes quite a few victories before reaching him and without a save feature, it must all be done in on sitting. Oh well, despite never having met the ultimate opponent, I still enjoy “Pro Wrestling” as both a one or two player game, and the unique characters and moves will always stay with me. 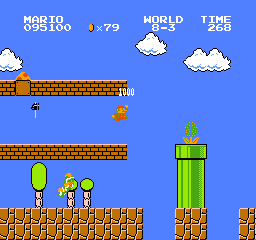 This should come as no surprise….”Super Mario Bros.” is easily the best of the Black Box titles. What other game on this list can be credited with ushering in an entire genre (action platformer) as well as all the clones and copycats that comes with revolutionizing video gaming? Of course, the answer is none, which means that “Super Mario Bros.” is THE game that stands heads and shoulders above the rest on this list. Whether it was on the ground, in the clouds, underwater, or inside castles, Mario’s first Princess rescuing adventure will always have a place in video gaming history.