Admittedly, mech games as a genre didn’t appeal much to me when I was first introduced to them in the 90s. The controls seemed way too complicated and the payoff didn’t appear to be significant enough to invest the time. Then I was introduced to Iron Soldier for the Jaguar and my opinion has somewhat changed. When you’re trying to find the best games for a console with a small library like the Jaguar, you have to play each title with an open mind. I picked up my copy of Iron Solider a few years after getting my Jaguar as the premise intrigued me. But like any game, premise can only get you so far. I was hopeful when I inserted the cartridge into my Jaguar after studying the controls while reading the manual.

Iron Solider is set in a dystopian future where the Iron Fist Corporation (IFC) has taken over the world using military force to create a dictatorship. In an effort to maintain its authority, IFC is set to unleash its newest weapons, 42 foot tall piloted robots called Iron Soldiers. A resistance movement has stolen one of these Iron Soldiers and is using one of their own pilots to man it in an attempt to take the government back from IFC. Iron Soldier is presented with 16 total missions, 4 to begin the game with, to accomplish the ultimate goal. Once unlocked, the missions can be completed in whichever order the player chooses.

You are presented with your goal before starting each mission and the descriptions in the debriefs are pretty straightforward. These missions usually involve destroying something so if that’s your cup of tea, Iron Soldier is the game for you! What is less straightforward is the controls. Before starting each mission, you equip your Iron Soldier with whatever weapons it has available to it at the time. You start out with just your hands and an assault rifle but as the game progresses you can earn grenades, chain cutters, gatling guns, rocket launchers, missiles and a cannons. You’re also given the option to equip those weapons to different parts of your body (hands, shoulders, hips). The only thing this affects from a gameplay standpoint is which buttons on the keypad to press in order to switch to that particular weapon. The game provides an overlay for the keypad to allow for easily identifying the Iron Solider, or IS for short, body parts. You will need to press both the A button and the direction pad up or down (forwards or backwards) in order to move the IS but once it begins to move in the direction you choose, you don’t have to hold any button to continue moving. This is nice because it gives you a chance to work on properly equipping your IS or look around for enemies while you move. If what you’re currently walking over is small enough, like a tank or a tree or a house, the IS will just plow right through it, destroying it in the process. If it’s a larger building, IS will either need to walk around it or you can try to destroy it with your hands. Inside these smaller, hand destroyable buildings, is where you’ll find weapons, health and ammo. Once you complete the mission objective, the screen fades out and you’ll be taken to the mission summary screen. At this point, you can select your next mission from the list that is available to you.

Iron Soldier is your typical polygon heavy first person style game from the early to mid 90s. The graphics seem blocky and without much detail today but at least they are crisp and clean looking and not muddy and smudged like so many other games from the era. There are a variety of enemies that attack you and you’ll have to employ various techniques and strategies in order to dispose of them with the weapons you have. Helicopters tend to be your biggest nuisance early on since you cannot destroy them with your hands unless they get very close to you. As expected, the enemies get bigger and more difficult to destroy as the missions progress, but your IS should be much better equipped to deal with them as well. Iron Soldier is by no means an easy game and you’ll spend a decent amount of time in the early missions mastering the controls of moving your IS around, equipping weapons rapidly, and being efficient with your ammo while never losing sight of your mission. Your goal is to complete each mission, not destroy each enemy that comes onto the screen. The enemy supply is never-ending so it would be fruitless task anyway.

Iron Soldier is easily one of the best games for the Jaguar in my opinion. Controlling your massive monster of metal is a joy once you get the hang of it and watching things explode makes me feel like I’m in a Michael Bay film. Explosions, explosions everywhere! Dialogue? Who needs dialogue? Just blow shit up! 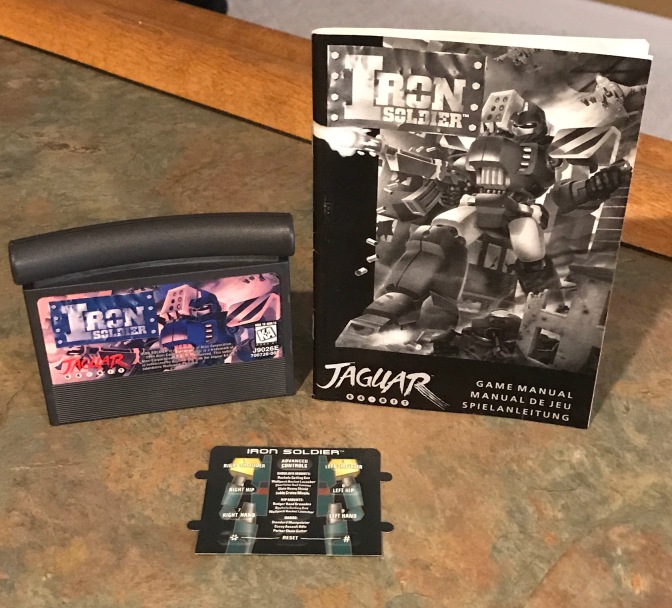