Ok, ok…After Burner is more of a combat flight simulator and Choplifter is well, let’s just say a shooter with depth. So those two games don’t exactly fit the traditional mold of the textbook definition of shooters but I don’t care. I’m lumping them together with Fantasy Zone and Thunder Blade in this Master System “shooters” post anyway.

Shooters such as Asteroids and Galaxian have been an important part of any home console’s library since the very beginning of home consoles. Galaga is probably my favorite shooter of all time but I never had a way to play it on home consoles until I bought the NES version many years after it’s release. I have a tenuous relationship with shooters as I tend to really enjoy their pick up and play simplicity while simultaneously admonishing them for being so damn difficult. These 4 Master System games don’t really change the view I have of shooters, especially those from the 8-bit era.

Sega’s After Burner was a damn cool looking arcade game. You controlled an F-14 Tomcat jet and man the cockpit as if you were a real pilot. The sit down version of After Burner even rotated left and right as you maneuvered the jet during flight. This experience was unmatched in the arcades at the time and the increased cost of a single play reflected this. I wasn’t too keen on dropping multiple quarters into a machine I feared would chew me up and spit me out in record time so I only played a couple times when I came across the intimidating machine. Sega’s Master System port was undoubtedly going to suffer let down from that superlative arcade experience and generally After Burner looks and plays just ok. I like that I can do barrel rolls with my jet and it plays pretty solid but as a whole After Burner is a tough game and as a result, not one that I find myself playing too often.

My first experience with Choplifter was on my friend’s Apple IIe computer back in the 80s and I thought it was a great, yet frustratingly difficult game. To make things confusing Sega then ported Choplifter to the arcades from the computer version and the Master System version I own is a port of that Sega arcade version. Got it? Your goal is to rescue POWs from camps while avoiding enemy fire coming from both ground and air then returning them to safety. What made Choplifter intriguing to me back then was the fact that I could accidentally kill the POWs that I was attempting to save during the course of battle, just like in real life. This could be done either by landing my chopper on top of them, shooting them with my gun, or simply crashing the chopper with them on board. The game even keeps track of how many POWs you kill and if you kill too many, it’s game over! The biggest challenge for me when playing Choplifter both then and now on the graphically upgraded Master System version, is controlling my chopper while attempting to shoot enemies located on the ground. This is much more difficult than it sounds since you have to go back and forth between a nose pointed down, shooting at the ground position to a horizontal position to shoot enemies in the air. Tough stuff to say the least when you consider your chopper crashes and burns with one hit. I was never able to get far back then and I can’t get far today no matter what system I play this on.

Fantasy Zone, which originated in Japanese arcades, is my favorite of the 4 games I’m highlighting in this post but not because it’s the easiest. Fantasy Zone is actually pretty well known for being tough as nails but I tend to fare better at this title than all the rest because it more closely matches the types of twitchy side scrolling shooters that I am used to. It has a similar layout to Defender in that you can move your ship (named Opa-Opa) in either left or right directions to play on a circularly scrolling screen. Opa-Opa must blast brightly colored enemies while taking out the bases in which the enemies generate from. Defeating enemies and bases will result in coins being dropped and Opa-Opa has a limited amount of time to pick them up before they disappear. Money can be used in shops to buy upgraded weapons or increase your ship’s skills. This is a neat feature that Fantasy Zone does well. After destroying each of the level’s bases, Opa-Opa must take on a whimsically maniacal boss. Like typical shooter boss battles, these bosses have weak point that must be targeted while avoiding the various hazards they dish out. Fantasy Zone’s backgrounds and enemies are filled with pastel colors with cutesy appearances and as a result, this is the game most people point to when attempting to pin-point or define the “cute ’em up” genre of shooters. Whatever you want to call it, Fantasy Zone is super fun and maddeningly addictive.

Last but not least is Thunder Blade, yet another Sega developed and published arcade port from the 80s. You man a helicopter, armed with guns and missiles, which is tasked with taking out enemies in what appears to be a desert-city setting (Baghdad maybe?). The game starts out well enough in a top down perspective. You use one button to shoot at enemies in the air while using the second button to drop missiles down onto ground enemies. Thankfully, you have unlimited ammo for both weapons and since there’s no bonus on how accurate you are, just bomb away! Every other level changes the perspective from top down to a behind the helicopter 3D view. Here is where the game gets tough as it is quite difficult to line your chopper up with the enemies to make sure you hit them. I tended to fly low and take out ground enemies with my gun while attempting to avoid the both air and ground attacks. I wasn’t super successful employing this technique but I fared better this way than I did playing further up in the sky. I wish Thunder Blade was only a top down game but I appreciate what Sega tried to do here by mixing up the gameplay.

Fantasy Zone – game only B+ 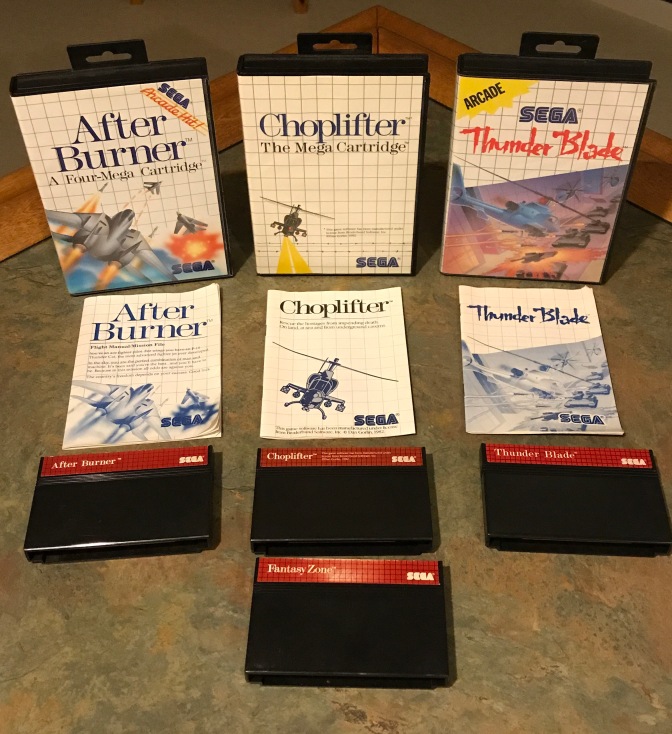