When the Nintendo Entertainment System was released in 1985, it introduced an aesthetically pleasing and informative color coding system to help consumers decide on what style of game they were potentially buying. Words like “action”, “sports”, “arcade” and eventually, “adventure” were just some of titles Nintendo used to neatly categorize their original run of Black Box (and ultimately silver and gold) games. When NEC decided to dip their toes into the video gaming market by releasing the PC Engine in Japan in 1987 and the Turbografx-16 in North America in 1989, it was the NES that they were competing against. Sure, this system got lumped in with the 16-bit console generation of the Sega Genesis and the Super Nintendo, but it was the NES market share that NEC really was after. The graphics and sound were a noticeable upgrade and a CD add on was in the works.

he works that would really take this console to the next level.

Turbografx-16 games were sold in cardboard boxes not much larger than what could hold a CD sized jewel case. Game Hu-cards or CDs for the TG-16 were housed inside jewel caes which also contained the game’s manual and inside the game boxes were pieces of styrofoam that kept these jewel cases in place. Like many cardboard boxes used to house game cartridges from Atari to Colecovision to the NES and SNES, TG-16 boxes were often discarded once their primary purpose, to attract potential buyers and keep the games safe, was complete. For those who did manage to keep the game boxes intact over the decades, you were treated to bright, colorful artwork on the front, while the back was utilized for game descriptions and actual screen shots taken from the game’s themselves. TG-16 game boxes are nice to have for the artwork and descriptions but as far as functionality goes, most would agree that the jewel case with the manual is all that is needed.

One thing that is easily overlooked and is one of those interesting aspects of the Turbografx-16 Hu-card and CD/Super CD library is that these games were also color coded and categorized, similar to the early NES games. This is most clearly and consistently evident on the aforementioned game boxes where a banner at the top of each box will be filled by a specific color based on the style of game and what category NEC chose to fit it into. Within the left side of the banner, it will simply state “TurboGrafx 16” and the right side of the banner will list the name of the category, such as “sports”, “role-playing”, or “adventure”. In some cases, the box will also contain the words “16-Bit Graphics” above the category title, to make sure that prospective buyers knew that this game had better graphics than your old, musty NES. However, this is not consistent across all TG-16 games.

What the Turbografx-16 was also not very consistent at, was the manner in which their jewel case spines either identified (or didn’t) the gaming category in which it belonged. For some games, the jewel case has a black label that contains the title of the game and a little colored box next to it that matches the game category/series color. For other games, the spine label is orange, with the name of the game in black with no category/series color box at all. I couldn’t find any definitively documented reason for why this is so inconsistent but my best guess is that original launch titles in August of 1989 through sometime in the Spring of 1990 were packaged with orange labels on the spines. Then in the late Spring/early Summer of 1990, around the time of the release of games such as “Bonk’s Adventure”, “Bloody Wolf”, and “Ys Book I & II”, the spines went to a black with the color coded box on the left. For the games released prior to the spine label change, there is no way to know what game series they belong to without the cardboard boxes that they came in as its not indicated anywhere on the Hu-Cards or in the manuals.

The inconsistencies for the color coded label spines makes it impossible to sort and store an entire library of Turbografx-16 games using this method. This is not a problem that many fans of the console or collectors in general have due to the increasingly difficult and expensive nature of Turbografx-16 game collecting. In my next post in the series, I will be discussing the artwork used for the games/game boxes and what worked and what mostly didn’t when it came to using these boxes to sell the product held within. The Turbografx-16 has a lot of great games to offer but many of NEC’s decisions were very questionable and lead me to believe they really didn’t know what they were doing when it came to promoting their console and games. 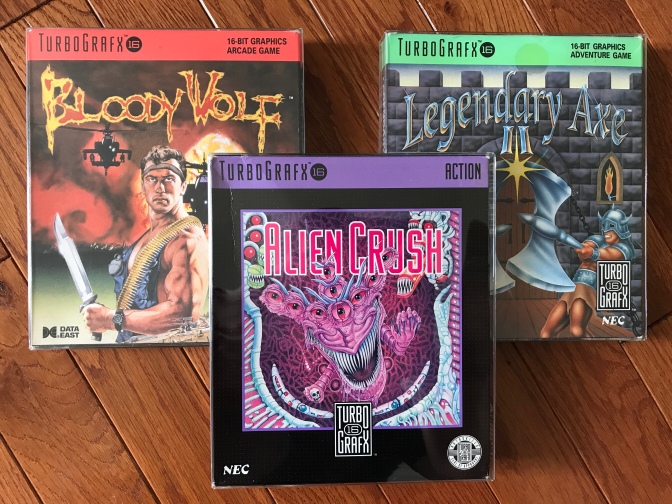 2 thoughts on “Turbografx-16 Box Artwork Part 1 – They Did the Game Series Thing Too?”