Motion pictures with video game tie-ins are as old as video games themselves. The Intellivison kicked off the phenomenon with Tron Deadly Discs in 1982 and the Atari 2600 picked up where Intellivision left off by releasing numerous other movie to game conversions for their console (Raiders of the Lost Ark, Halloween, Alien, Star Wars, Porky’s and of course, E.T. just to name a few). Some of these were officially licensed by the film’s studios and some were inspired by in name only.

By the 4th generation of game consoles, officially licensed movie to video game conversions were common and expected for the biggest of franchises. In 1993, there weren’t many franchises bigger than Batman and Terminator. Batman Returns saw a wide multi-platform release and the Sega CD of course had their own version of the game. I haven’t played any of the other versions but from what I understand, the Sega CD’s 3D racing levels are unique in order to take advantage of the CD’s scaling abilities. The game starts you off with these racing levels where you control the Batmobile and blast enemies while charging down Gotham’s streets. These levels are enjoyable but can be difficult. From what I’ve read, eventually the game eventually becomes a side scrolling beat ’em up but I haven’t advanced far enough to find out. I guess I just need to keep practicing.

Terminator is a side-scrolling platform shooter and the plot mirrors that of the original 1984 film, not the 1991 sequel. Regardless, this version is action packed with great graphics depicting a war-torn urban wasteland, smooth gameplay and outstanding music and sound effects while providing the right amount of challenge. I’ve been able to advance a few levels so far but haven’t spent as much time with this one as it was a fairly recent pick-up. From what I’ve heard, this version of The Terminator is superior to the Genesis, NES, SNES & DOS versions and I have no reason to believe otherwise based on what I’ve played. A very good game for the Sega CD.

Batman Returns – game only. Based solely on the driving/racing levels alone this game gets a B. Would need to advance further to the beat ’em up levels before I could fully assess this games value. 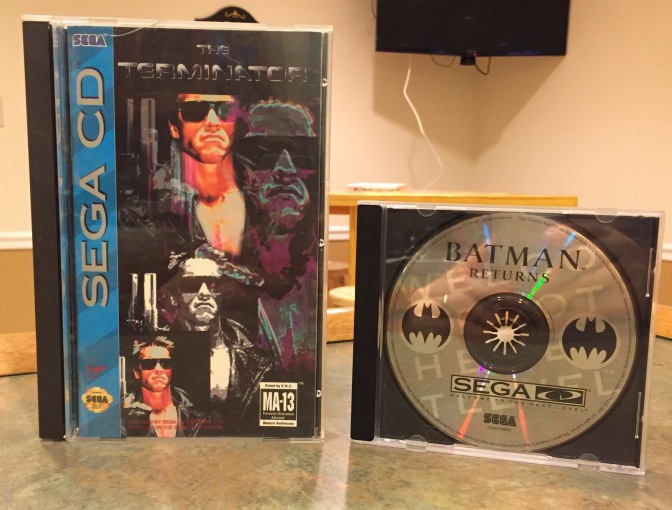